Background. The eLab City project was started in Second Life in October 2007 and will be up and running at least through the end of 2014. eLab City was originally envisioned as a lab environment taking the form of a “live-work-play” community as outlined in a September 24, 2007 memo and a second memo on September 25. A more detailed concept plan was developed on October 1, 2007. Ideas for eLab City were also influenced by the Glam City build in Second Life. A call for proposals for the final 4-phase concept plan was made, with the bid for development awarded to Cezary Ostrowski and Nadia Hennrich.  Construction on the 2 island region eLab City East and West began in November 2007 and was completed in May 2008.  A third island, eLab City Northwest, was added in 2009 but will be removed in 2013.

The use of eLab City for academic research is detailed in my 2010 paper, “eLab City: A Platform for Academic Research on Virtual Worlds,” published in the Journal of Virtual Worlds Research.  Additional background on virtual worlds may be found in my 2012 chapter, “Quality of Virtual Life,” published in in Transformative Consumer Research for Personal and Collective Well Being.

Visiting eLab City.  This SLURL will take you to eLab City and put you on the Great Lawn in front of the Design Center.

eLab City Construction. Construction began in early December 2007 on eLab City. We began with mock-ups of the first structures.This photo from December 7, 2007 shows the initial layout, much of which was modified in the following weeks.  The brown buildings on the left in eLab City West represent the location of the apartment buildings, originally connected by a walkway over a waterway.  Locations of Alcatraz and a circular park are shown respectively by the orange rectangular and round objects at the bottom left.  The green objects in the lower center show a large outdoor area and stage.  The large yellow building in the center rear is the design center, and the research labs are outlined in grey at the far right. 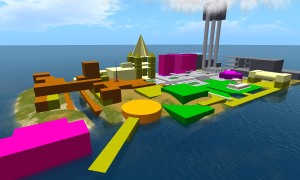 Progress on the initial design of eLab City

On the left, we see eLab City a week later on December 14, 2007.  The Sky Cube appears at the far right, and the yellow shopping mall sits to the left of the now pink design center .  This is pretty close to the final rough layout of the major structures.

Over the next month, construction began in earnest. Ostrowski started with the apartment buildings in eLab City West. 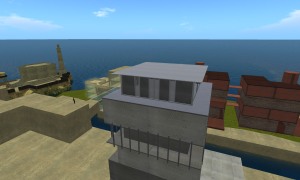 Version 1.0 of the apartments are shown here, as of January 14, 2008. Over the next few weeks, these apartment buildings were judged too industrial and were torn down.

Library and Cinema under construction.

eLab City Today.  The photo below shows the location of the main structures in eLab City East and West. 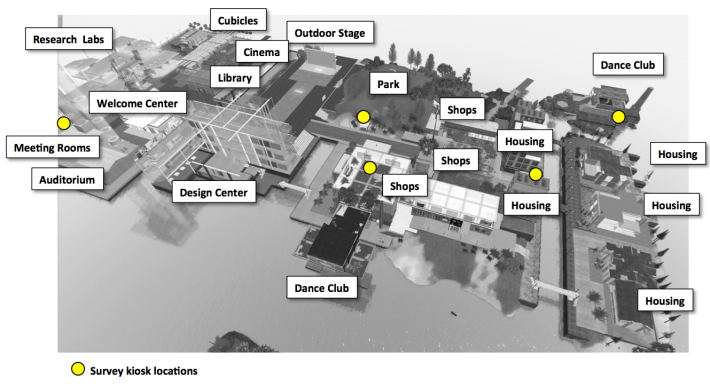 The heatmap below shows the concentration of visitors to eLab City, and the most frequently visited areas.

A comprehensive photo library of eLab City is maintained on Facebook.

Tom Novak is the Denit Trust Distinguished Scholar and Professor of Marketing at the George Washington University, Washington, D.C.
View all posts by Tom Novak →